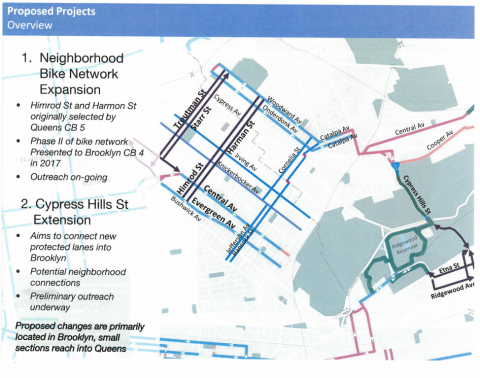 Plans from the Department of Transportation (DOT) to expand the bike lane network into some sections of Ridgewood and Glendale received approval last week from members of the Community Board 5 Transportation and Public Transit Committees.

At the committees’ joint monthly meeting on May 22, all but one member voted for the advisory body to take a position in favor of the DOT’s plan. The proposed bike lanes — which mostly apply to Bushwick and Cypress Hills in Brooklyn — are on Troutman Street, Starr Street, Himrod Street, Harmon Street and Cypress Hills Street.

In Ridgewood, the bike lanes on Troutman Street, Starr Street, Himrod Street and Harmon Street would be installed between Cypress Avenue and Woodward Avenue. Only the small portion of Cypress Hills Street south of the Jackie Robinson Parkway to the Brooklyn border would be affected in Glendale.

Board 5 previously approved bike lanes along Himrod Street and Harmon Street, but according to DOT project manager Craig Baerwald, the agency never got around to installing them.

Baerwald added that the bike lane network in Ridgewood and Bushwick is a high priority for the DOT after a 2017 study identified them as areas with a high number of cyclists killed or injured and a limited density of bike lanes.

“We all know the benefits of bike lanes,” Baerwald said. “It provides dedicated space for cyclists, discourages speeding and increases the predictability of their movements as well.”

The installation of the proposed bike lanes on Troutman Street, Starr Street, Himrod Street and Harmon Street would involve painting lines on the 30-foot-wide streets to create an 8-foot parking lane on the left side, a 5-foot bike lane in the middle and a 17-foot combined travel and parking lane for cars on the right.

While the plan was met with minimal criticism from the committee, some members did provide suggestions as to how it could be improved. Committee member John Maier, for example, said that when the Board originally approved bike lanes on Harmon Street and Himrod Street they extended as far north as Metropolitan Avenue.

“I do think you guys need to start looking at Metro, especially with that connection on Troutman and Starr,” Maier said. “They make sense, we have people that have had issues with traffic speeds and abusive driving on Troutman for many years.”

Other suggestions from the committee included adding signage telling bikers that they must obey regular traffic laws, better enforcement of those laws and adding bike lanes to help commuters deal with the impending shutdown of the L train next summer.

Baerwald said that the plan will be presented to the full community board in June, and the DOT hopes to install the lanes by the end of the year.

Brooklyn Community Board 4, however, was not as receptive to the plan, Baerwald said, and it declined to support the bike lanes.