Board 5 flights back against ‘terrifying’ developments in Ridgewood historic district 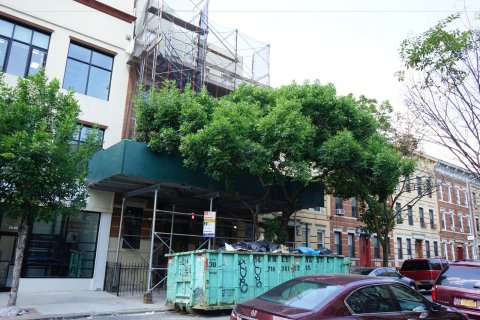 Board 5 flights back against ‘terrifying’ developments in Ridgewood historic district

The prospect of gentrification deepening into Ridgewood is real, and Community Board 5 is prepared to fight back.

At a Board 5 meeting on July 11, local residents voiced their concerns about a pair of buildings on Madison Street and Woodbine Street where fourth-story additions have been approved by the Department of Buildings. While both properties are included on the National and State Registers of Historic Places, they are not protected from development without City Landmark status, and the expansions are legal under the current zoning in the area.

With a resolution brought to the floor by the Zoning and Land Use Review Committee that passed unanimously, the board hopes to “send a message” to the Department of City Planning and stop similar developments in the future, said committee chairman Walter Sanchez.

“There aren’t too many places in the city that are in play like Ridgewood is right now, where a developer could come in and take advantage of the zoning and really destroy the character of that particular block,” Sanchez said. “We’re just afraid, terrified that this is just going to continue to happen.”

The resolution, written by committee member Ted Renz, calls for a moratorium to be placed on any activity that requires DOB approval and/or action that involves adding more stories or height to a building with the intent of adding more housing units. The moratorium would also be retroactive to June 5, which is the date when Board 5 first met with City Planning to discuss the issue, Renz said.

The Board’s strategy going forward is to down-zone the entire block. As it stands now, the combination of C4-3A commercial and R6B residential zoning codes on the block allows for a maximum height of 54 feet. Renz said the goal is to limit the maximum height to 40 feet, which is the approximate height of the attached brick homes on the block.

While Sanchez said that the meeting with City Planning left the impression that the agency is inclined to help the community, District Manager Gary Giordano knows that it’s going to take a group effort from many local offices.

“We are going to need to push them much harder, with help from our elected officials, to get Ridgewood rezoned so that this cannot continue,” Giordano said. “There is a lot of six-family homes in Ridgewood.”

Renz said that the community is counting on Council members Robert Holden and Antonio Reynoso to come through for them, but the effort has already reached much higher than that.

Julio Salazar, a representative for Congresswoman Nydia Velazquez, said at the meeting that their office is going to call on City Planning to remain responsive to the needs of Ridgewood.

“These are historic districts, and we wanted them to be historic districts because of the way they look,” Salazar said. “We want to make sure that they are preserved, and that these sort of out-of-character developments don’t lead to further speculation and set a precedent across the community.”

While the Woodbine Street building currently has a green construction fence around it with a rendering of the completed project posted outside, work on the structure has yet to begin. At the Madison Street property, however, construction is already underway with scaffolding scaling the building and a large dumpster on the street in front filled with debris.

If City Planning accepts the board’s request for a moratorium until the down-zoning study is completed, it is possible that the Woodbine Street project could be stopped, Renz said. But the project at Madison Street is too far along to be stopped.