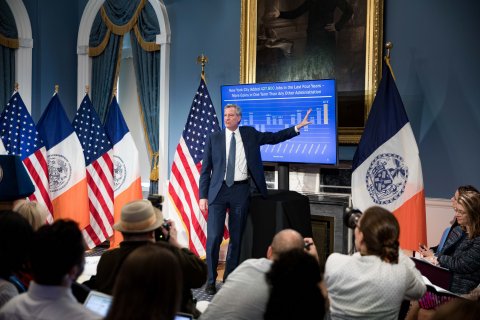 With the announcement of Mayor Bill de Blasio’s fiscal year 2019 executive budget proposal on April 26, many City Council members from Queens were left wondering if their constituents would ever catch a break.

A tax break, that is.

The $89 billion city budget — which is $3.82 billion higher than the budget adopted last year — does not include the City Council’s plan to give a property tax rebate to middle-class homeowners. Proposed by Speaker Corey Johnson in response to the mayor’s preliminary budget plan on April 11, the rebate would give $400 back to homeowners who earn less than $150,000.

In a statement released the day after de Blasio’s announcement, Councilman Robert Holden said that the budget is not what he had hoped for.

“Considering that this is the largest budget we’ve ever seen, it would have been nice to consider offering a small refund to those that own homes across the city,” Holden said. “I would have liked to see property tax reform addressed in this budget, because there continues to be undue strain on the middle class.”

Holden’s District 30 covers Maspeth, Middle Village, Glendale and parts of Ridgewoodand Woodhaven, where 44 percent of housing units are owner occupied and the combined average household income is approximately $78,000, according to the Department of City Planning.

During his April 26 announcement, de Blasio responded to a question about the property tax rebate proposal by saying that nothing is final yet.

“Look, we look to the Council’s budget response,” de Blasio said. “We thought there were some things we could address but a number of things were very substantial and we’d have to see what was possible going forward.”

While negotiations between the Council and the Mayor’s Office will determine the budget’s final contents by the July 1 deadline, Johnson and other Council members like Holden have already made their positions clear.

In a joint statement between Johnson and Councilman Daniel Dromm, who represents District 25 in Queens and is the Council’s finance chair, the pair expressed disappointment that some of their initiatives were left out, but hope that extra revenue expected in fiscal year 2018 will work to their benefit.

“The Council will continue to advocate for our priorities throughout budget negotiations and we plan to do so in a collaborative and transparent budget process,” the statement said. “We urge the administration to fund the Council’s priorities for the good of our neighbors and our city.”

Much of the Council’s frustration over property taxes stems from an ongoing lawsuit filed against the city by Tax Equity Now New York, a coalition of real estate stakeholders and civil rights activists. The research performed by the coalition alleges that the city’s property tax system is discriminatory against neighborhoods that have a high number of minority residents, and more valuable properties are taxed at a lower rate than less valuable properties.

In a joint statement from Councilmen Justin Brannan, Steven Matteo, Joseph Borelli, Paul Vallone, Barry Grodenchik and Mark Gjonaj on April 30, they made reference to the inequalities of the system and made a much more pointed demand for their constituents.

“I know we speak for just about every property owner in the five boroughs when we say, ‘C’mon man, give us a break!’” the statement said.