M Line soon to be restored to Middle Village 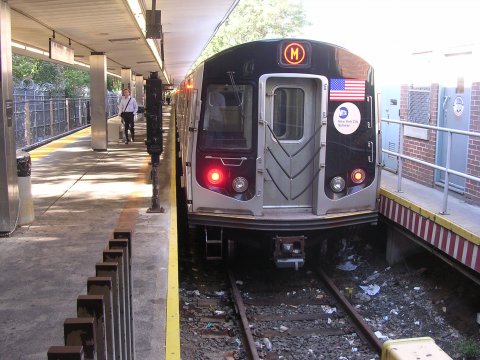 M Line soon to be restored between Middle Village and Ridgewood, but the train pain will continue

What started as the “Summer of Hell” will continue into next year for residents of Middle Village, Ridgewood and Glendale as the MTA wraps up Phase 1 of the $163 million reconstruction project and begins Phase 2.

Work is nearly complete — and is expected to be finished on Sept. 1 as scheduled — on the Fresh Pond Bridge overpass that carries the M train from the subway car storage yard to the Metropolitan Avenue stop in Middle Village.

Over the course of this phase of the project, the MTA successfully rebuilt the century-old Fresh Pond Bridge using modern building materials that will provide the nearly 60,000 daily M train customers a smoother and safer ride.

The completion of the initial phase will see M train service restored between Middle Village and Ridgewood, as the M will operate a shuttle train service making all stops between the Middle Village-Metropolitan Avenue station and Myrtle-Wyckoff Avenues.

The shuttle is expected to run every 10 minutes during the day, and every 20 minutes at all other times.

Phase 2 of the project is set to kick off on Saturday, Sept. 2, which will replace the deteriorating century-old Myrtle Viaduct which connects the M train with the J and Z trains. The 310-foot-long concrete structure is suffering under decades of heavy use (the viaduct was built in 1913 and has seen non-stop use since), and exposure to the weather.

“Work is on schedule for this critical M line reconstruction project that is sorely needed on the Myrtle Avenue Line,” said MTA managing director Veronique Hakim. “Without rebuilding the Myrtle Viaduct and the Fresh Pond Bridge, we would not be able to continue to run M trains safely because the deteriorating condition of these structures are getting to a point beyond what our crews can fix during routine maintenance. We thank our customers for their patience and we hope they will agree that the short-term inconvenience now will be worth the improved reliability moving forward.”

In order to repair the Myrtle Viaduct — which is situated between the Myrtle Avenue J/Z/M and Central Avenue M stations — the MTA will build a concrete deck structure and safety walkways, install a new third rail, low-vibration tracks, steel columns, new foundations and new drainage.

This work is expected to last eight months, ending in spring 2018, and will require the full suspension of M train service between Myrtle-Wyckoff Avenues and Myrtle Avenue-Broadway for the duration of the work.

Along with the special shuttle train between Middle Village and Ridgewood, the M line will also operate weekday service between Broadway Junction and Forest Hills-71st Avenue.

Shuttle train customers can switch to the L train at the Myrtle-Wyckoff Avenues station or transfer to one of the free shuttle buses for service to the Myrtle Avenue J/M/Z station at Broadway in Bushwick.

According to the MTA, customers who exit at the Myrtle-Wyckoff Avenues or the Myrtle Avenue-Broadway stations and transferred to the free shuttle bus can re-enter the subway system at the end of the shuttle bus route without have to pay a second fare.

For service to Knickerbocker Avenue or Central Avenue, which will remain closed during this phase, customers can transfer to one of the free shuttle buses to the Myrtle-Wyckoff Avenues station to get the L or M trains, and Myrtle Avenue-Broadway and get the J/M/Z trains.

Transit personnel will be on hand at the affected stations and shuttle bus stops ahead of the service change to provide information, assist customers, and answer their questions.

For more information on these changes and how they will affect your commute, visit mta.info.