Mad as L: Locals who moved to avoid L closure steaming over change in repair plans 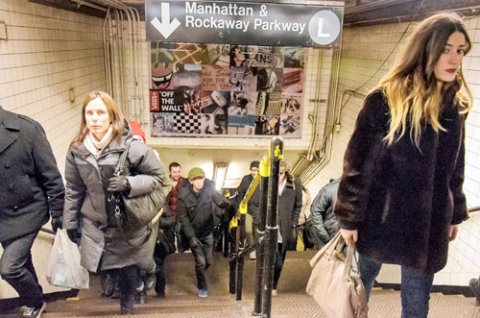 This article originally appeared on Brooklyn Paper.com and was written by Colin Mixson

They want the governor to go to L!

Brooklynites who fled Williamsburg and Bushwick to avoid the 15-month L-train closure are enraged over Gov. Cuomo’s last-minute decision to call off the plan that many say forced them to uproot their whole lives.

“We specifically moved because of the shutdown, it would have made work impossible,” said Whitney Lopez, who with her fiancé moved from their apartment near Bushwick’s Morgan Street L-train station to a pad on the border of Gowanus and Park Slope last month.

The couple would have simply renewed their lease on the Bushwick apartment — which Lopez said cost about $250 less per month than their new place — had they known the long-promised L-pocalypse was a years-in-the-making false alarm, she said.

“We had such a good deal for our old place,” Lopez said. “It feels so disrespectful. He definitely does not care about what’s actually happening in New York City.”

Officials with the state-run Metropolitan Transportation Authority began warning straphangers that the line’s East River–spanning Canarsie Tube, which sustained severe damage in superstorm Sandy, may close for more than a year’s worth of repairs in early 2016.

And later that year, they announced they would shutter the Tube for 18 months — which later dropped to 15 — to restore it, starting a great migration from residences along the North Brooklyn line that only grew larger as the clock ticked down to the closure’s previously announced start date of April 27.

Indeed, a Park Slope broker said that roughly 30 percent of all condos he sold in nearby Carroll Gardens since October went to buyers fleeing Williamsburg — some of whom locked themselves into contracts just days before Cuomo’s 11th hour announcement.

“I know people who already picked up and moved,” said Peter Perez, who works for real-estate firm Douglas Elliman. “I know somebody who’s in contract and their whole reason for moving was the L-train shutdown. It’s insane.”

Another former Williamsburger left her old apartment near the L train’s Montrose Avenue station in June for a Park Slope pad, where she pays roughly the same price for a smaller space occupied by more roommates, she said.

The recent transplant doesn’t regret her move, but said she would have never ditched her former spacious spot if she knew Cuomo planned to stop the L-train closure at the 11th hour.

“In terms of what I could afford, it had everything I wanted,” said Mahwish Mahbub. “I like the apartment I was in.”

Those who did not flee Williamsburg, however, should not necessarily expect smooth rides along the L line following the unexpected change in plans.

The state’s new proposal still requires at least 20 months of repairs once the job kicks off in April, according to officials, which will take place on nights and weekends to allow continued, reduced service throughout the job.

And transit leaders already said that some previously promised alternative-commuting options — such as dedicated Williamsburg–Manhattan ferries, and a high-occupancy vehicle lane across the Williamsburg bridge — will likely get scrapped, leaving commuters with less ways to cross the river once the work begins