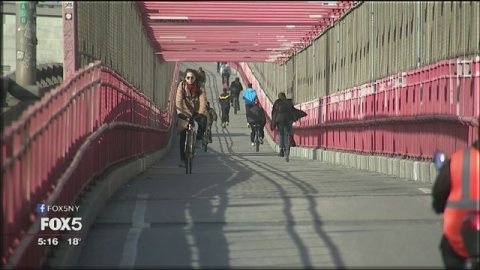 This article originally appeared on Fox5ny.com and was written by Jessica Formoso

NEW YORK (FOX5NY.COM) - Now more than ever New Yorkers are biking to and from work or wherever else their destination may be. Daily bike trips in New York have tripled since 2000, according to Sam Polcer, the communication director at Bike New York, which runs the world's largest free urban bike education program.

"Unfortunately, there is a lack of secure parking for cyclists in New York," which deters more people from riding, Polcer said.

Many cyclists are concerned about bike theft. City officials recognize the lack of secure bike parking, which is why the Department of Transportation is launching a valet parking pilot program for bikes.

"We committed in the plan to a new initiative to launch secure bike parking near transit and major destinations to overcome this barrier," a DOT spokesperson said in a statement.

Polcer said New York could easily become what is called a multi-modal city, where residents bike to the subway, bus, or ferry.

The city will test it out at University Place in Union Square, Broadway and 42nd Street, and Myrtle Wyckoff Plaza In Ridgewood, Queens. The shed-like structures will hold up to 29 bikes. These sheds will be staffed, DOT said, and that is the only time riders can drop off or pick up bikes.

The vendor will decide how to run the valet parking and what is required of customers in terms of identification. Parking your bike there will cost you some money, however, we still don't know how much.

No vehicle parking spaces will be removed, dot said. Cyclists will be able to start using the valet parking sometime in spring 2018.