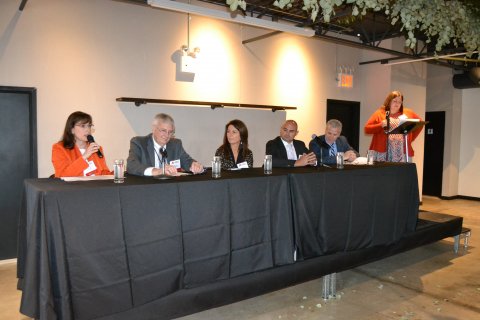 This article originally appeared on qns.com and was written by Anthony Giudice

More than a dozen real estate and development experts took the stage at the QNS Real Estate Conference 2017 on Nov. 2 at Gantry Loft in Long Island City to talk about the current state of the real estate market in Queens, and what the future holds.

The first panel was a discussion on “Queens Mega Projects” and how these projects will affect not only residents in Queens, but businesses as well.

Some of those “mega projects” that are taking place right here in Queens are the developments at both LaGuardia and John F. Kennedy International airports. Developers and community leaders know that one way to bring more people into the surrounding communities is to upgrade these facilities, and Queens should see a huge boon once everything is complete because areas like Long Island City are already expanding.

Elizabeth Lusskin, president of the Long Island City Partnership, believes LIC has what big businesses, like Amazon and others, are looking for.

“We are already what the companies of today and tomorrow want,” she said of LIC. “Which is a live-work, tech savvy, creative community that can get you to the world through two amazing — and only becoming more amazing — airports without going through a tunnel or over a bridge.”

The retail sector in local communities will also see positive impacts from these large-scale airport projects, Michael X. Mattone, CFO of Mattone Group, said. And the way to do that, he believes is by creating places and businesses that people want to visit.

With businesses, both big and small, looking towards Queens as a place to open up shop, the residential market is seeing its own increase.

The condominium market is currently on the rise, with around six condo projects underway in Long Island City, alone, and Eric Benaim, CEO and founder of Modern Spaces, believes it is good time to be a renter.

According to Benaim, since the condo market is exploding, developers are beginning to offer more and more amenities and are creating more luxury condominiums to standout from the crowd.

Long Island City and the surrounding areas aren’t the only places these experts have their eyes on, however.

Anthony Lolli, founder and CEO of Rapid Realty, said he and his company are looking at investment opportunities in areas such as Glendale.

“Brooklyn is still booming,” Lolli explained. “I think a lot of what’s happening in Queens ‘spill over’ coming from  Brooklyn, especially with the proximity between Bushwick and Glendale. So I see opportunities in Glendale, I’m buying heavily in the Glendale area. I see rents going up, I even see some retail spikes in Glendale.”

While the real estate market is growing, Queens’ commercial market is expanding to match it.

According to the experts on the State of the Commercial Market panel, companies are now looking at the borough as a better place to come and start their business or to expand, rather than going into Manhattan or Brooklyn.

While many companies are looking at areas like Long Island City and Astoria to open their business, Stephen R. Preuss, senior managing partner for Cushman & Wakefield, is “bullish” on Queens, and particularly the borough’s large industrial areas like Maspeth.

These experts see the trend of businesses moving into the World’s Borough continuing as long as the infrastructure allows for it.