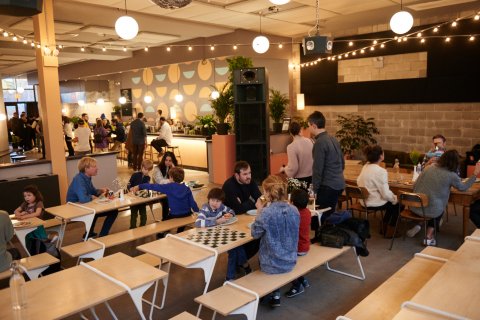 After a soft opening of its indoor location for special parties and music listening sessions, Nowadays in Ridgewood is about to become an everyday getaway.

Located at 56-06 Cooper Ave., Indoors at Nowadays will feature a full kitchen and bar for the first time when it begins its year-round, seven-day-a-week schedule on Jan 18. The new, 5,000-square-foot space also has a communal dining room with collapsible tables that are moved once dinner service ends to open the floor for dancing and music, which plays through two state-of-the-art sound systems.

Co-owner Justin Carter said that after three years of running the seasonal outdoor venue with his business partner, Eamon Harkin, he’s met with a range of emotions now that they will be open year round, seven days a week.

“Excited, relieved, nervous, all of those things,” Carter said. “We’re pleased that we have the space, and what we’ve learned over the years is you can always move and change the things you’re doing to fit what people want.”

Carter and Harkin proved they were men of the people, and the people showed what they wanted. The two owners launched a Kickstarter campaign to raise money for the sound systems, and 897 donors later they raised a total of $102,762. They are both DJs and built a following over the last decade with their Mister Sunday and Mister Saturday Night roaming parties, and they used that money to build two custom-made sound systems.

The other main attraction at Indoors at Nowadays is the kitchen, staffed and operated by restaurateur Henry Rich. The food menu features an assortment of bowls, sandwiches and snacks with vegan and vegetarian options. The bar will offer local craft beers, natural wine and affordable cocktails. There will also some breakfast options during brunch service on the weekends.

Indoors at Nowadays takes pride in connecting with the community, Carter said, and they will offer a number of unique programs and events that focus on wellness and knowledge.

Some upcoming events that are likely to be staples at the hangout are parties hosted by guest DJs and a Think Olio class on the show “Stranger Things” on Jan. 31. Another Nowadays novelty is the Planetarium listening sessions where guests lie on the floor immerse themselves into five hours of specially designed playlists.

For Planetariums and many other events, guests are not permitted to use their cellphones. Carter believes that rule is something that actually draws more people in.

“We’re all attached to our phones, and I think most of us when we take a step back we all have this desire to get away from it,” he said.