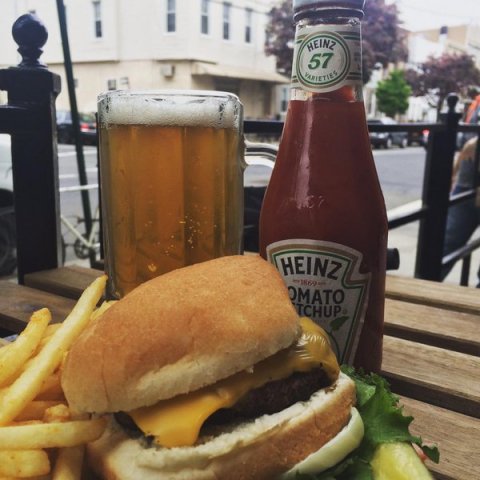 Join us Saturday, June 3 for The Total Ridgewood Immersion, our first Immersion of the season with Brooklyn Brewery. If you’ve never been on one of these daylong adventures with us, it’s one of the best ways to experience a new neighborhood or explore your favorite haunts with your beer-loving friends. You purchase an exceptionally cheap ticket and in exchange get a pack of WAM–walking around money–to spend throughout the neighborhood on your own, self-guided tour.

Over the past seven years, we’ve curated 25 of these epic afternoons, typically in our favorite Brooklyn neighborhoods. This year, we’re venturing to places we’ve never Immersed before–like Ridgewood, Queens, Beacon, NY, and West Harlem. (Tickets to our entire season, including a season pass, are on sale here.)

In Ridgewood, you’ll spend the day exploring quaint, leafy streets, generations-old bakeries, and laid-back bars. (For an idea of Ridgewood’s charms, we wrote this guide a few years back.)

Here’s what we’ve lined up so far, just over the Bushwick border:

Between noon and 6pm you’ll enjoy four Brooklyn beers, one each at The Bonus Room, the brand-new Factory Bar & Restaurant, Onderdonk & Sons, and Milo’s Yard.

You can add on an optional lunch at one of these establishments or at Paloma’s Mexican Cuisine, or keep your Immersion ticket to just the beers and a slew of neighborhood deals from the following establishments (get in touch if you want to add your business!):

The Bad Old Days: $1 Summer Ale cans and $1 off bar snacks
Aunt Ginny’s (and I Like Food inside Aunt Ginny’s): $1 off Summer Ale Drafts and $2 off sandwiches
Ridgewood Pork Store: Buy a pound of smoked pork sausage, get one pound half off
Tornado Crepe: Buy a crepe, get a free bubble tea
Kings XXI Juice Bar: Buy a juice, get a juice free
Madison New York: 20% off storewide
Rudy’s Bakery and Cafe: Buy an iced latte or iced Nutella latte, get a free Nutella or raspberry tart
Norma’s Corner Shoppe: Buy a large iced coffee, get a free cookie
+ more specials TBA

Tickets, on sale now, are exchanged the day of the event for a pack of WAM (walking around money) to spend in the neighborhood. You’ll get a ticket for a Brooklyn Brewery beer at four different bars, lunch, plus deals, for just $25, an unreal value in NYC. You can also opt for a $15 express ticket for just the four beers and the deals.

Check in is at The Bonus Room between noon and 1pm the day of the Immersion. We’ll have goodies from the Brewery if you’re one of the lucky early birds.

See you in Ridgewood in June, and be sure to join us on our other 2017 Immersions!